Aythya marila
Anseriformes
The swans, geese and ducks are mid-sized to large birds most commonly found on or near water. Most have plump bodies, long necks and short wings. Most feed while on the water, diving or merely tilting their bodies so that their heads and necks are submerged to search for fish, plants and invertebrates. Washington representatives of the order all belong to one family:
Anatidae
The waterfowl family is represented in Washington by two distinct groups—the geese and swans, and the ducks. Whistling-ducks are also considered a distinct subfamily, and, although they have not been sighted in Washington in many years, Fulvous Whistling-Ducks have been recorded historically in Washington and remain on the official state checklist. All members of the waterfowl family have large clutches of precocial young. They hatch covered in down and can swim and eat on their own almost immediately after hatching.
Common winter resident. Rare summer.
Source of Bird Audio

The Greater Scaup is the more northerly of the two species of North American Scaup. In the summer, they breed on marshy, lowland tundra at the northern limits of the boreal forest. In winter, they gather in coastal bays, lagoons, and estuaries, with some wintering on inland lakes. While the Greater Scaup does overlap with the Lesser Scaup in winter, it tends to frequent more open, exposed areas.

Outside of the breeding season, Greater Scaup form large flocks or rafts, numbering in the thousands. In tidal waters, they tend to face up-current. While individuals may drift downstream, birds from the back of the flock fly to the front, maintaining the raft in the same position. A diver, the Greater Scaup catches its food under water, but eats it on the surface. Occasionally scaups forage at or near the water's surface as well.

Mollusks and plant material are both important components of the Greater Scaup's diet. In the summer, aquatic insects and crustaceans are also eaten.

While Greater Scaup may nest at one year of age, they are more likely to begin breeding at the age of two. Pair formation begins in late winter or early spring on the wintering grounds and during migration back to the breeding grounds. The pair bond lasts until the female begins to incubate, and then the male leaves. Nests are located close to the water on an island, shoreline, or floating mat of vegetation, often close together in loose colonies. The female makes a shallow depression lined with grass. During incubation, the female adds down to the nest. Incubation of the 6 to 9 eggs lasts for 23 to 28 days. Soon after they hatch, the female leads the young to the water. Multiple broods may form small crčches and be tended by one or more females. The young can swim and find their own food immediately, but can't fly until about 40 to 45 days old.

Greater Scaups wintering in Washington breed in Alaska, although not all Alaskan scaups migrate down the West Coast. Some migrate along the Mississippi and Eastern flyways.

Greater Scaups are found during migration and winter in bodies of water in all lowland areas of Washington, although they are more common in salt water than they are in fresh water habitats. West of the Cascades, Greater Scaups start arriving in August and become common from September to mid-May, when most depart for northern breeding areas. Small numbers regularly summer in sewage ponds in western Washington. East of the Cascades they can be found from mid-October until mid-April before heading north. 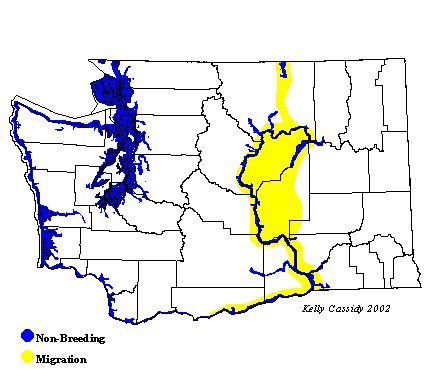