Larus minutus
Charadriiformes
This is a large and highly varied group of birds that do not have many outward similarities. Most are water birds that feed on invertebrates or small aquatic creatures. The order is well represented in Washington, with seven families:
Laridae
The family Laridae is made up of birds closely associated with water. Distributed throughout the world, representatives of this family nest on every continent, including Antarctica. Most are long-lived birds, many of which do not breed until they are three or four years old. Most are colony nesters and nest on the ground. Clutch size is generally small, varying from one to four eggs. Both parents incubate the eggs and help feed the young. The young typically hatch covered with down and stay in the nest for a few days, after which they leave the nest but stay nearby. Most, especially in Washington, raise a single brood a year. This group is known for its elaborate displays in the air and on the ground.

The Washington representatives of this family can be split into two groups, or subfamilies. The adaptable gulls are the most familiar. Sociable in all seasons, they are mainly coastal, but a number of species also nest inland. Many—but not all—are found around people. Gulls have highly variable foraging techniques and diets. Terns forage in flight, swooping to catch fish or insects. They dive headfirst into the water for fish. Although they are likely to be near water, they spend less time swimming than gulls.
Rare migrant and winter west.

The smallest of the gulls, the Little Gull has a short, narrow bill, red legs, and a short tail. In breeding plumage, the adult has a dark hood with a black eye and bill. Non-breeding plumage is similar, but the head is white, smudged with black, with a black ear-spot behind the eye. The body coloration is typical of gull plumage from above, but both breeding and non-breeding adults have dark underwings with pale wingtips, which are distinctive in flight. Juveniles are mottled dark brown, mixed with varying degrees of adult plumage characteristics. In flight, juveniles have a dark 'W' across the underwing.

Breeding habitat is mostly inland around low-lying marshy areas near lakes. Winter habitat is along coasts in protected shallow estuaries, mudflats, and beaches, and nearby fresh water lakes.

Lone Little Gulls are often found amidst flocks of Bonaparte's Gulls and terns. They often forage in flight, flying slowly low over the water and dropping down to pluck items from the surface. They also land on the water and feed from a swimming or wading position.

In the summer, small insects make up the majority of the diet. Small crustaceans, mollusks, small fish, and other aquatic creatures round out the diet the rest of the year.

A primarily Eurasian species, where they breed in colonies, Little Gulls in North America usually nest in small colonies or isolated pairs. Nests are on the ground, near water. Both sexes help build a nest of grass, weeds, and leaves with a shallow depression in the middle. Both help incubate the 2 to 3 eggs for about 3˝ weeks. Both parents help tend the young, which leave the nest shortly after hatching, but stay close by. Three to four weeks later, they fledge.

Migratory movements in North America are not well known.

How the Little Gull ended up in North America is unknown. Some argue that it has always occurred here in small numbers. Others claim that it colonized by way of the Bering Sea. A third theory is that Little Gulls came across the Atlantic. The first known record of a Little Gull in North America is from 1820, and the first nesting record is from 1962. As of 1999, there had been only 67 confirmed or probable nesting reports documented in North America. Most of these were in wetlands in the Great Lakes and St. Lawrence River regions. The first appearance in Washington was in the fall of 1974. It has now been recorded up and down the West Coast throughout the year. The nesting population in North America may not be self-sustaining, and is supplemented by an influx of European vagrants.

In Washington, sightings of the Little Gull are rare and occur primarily in the fall (September-November) in coastal and western Washington regions in aquatic habitats. Look for them in mixed flocks with Bonaparte's Gulls. American Lake near Fort Lewis (Pierce County) and Point No Point (Kitsap County) are traditional sites for this species. 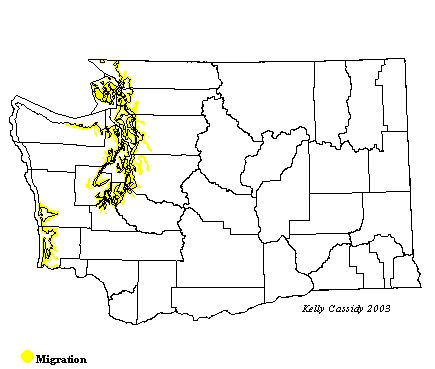